Bewitched is a slot game created by iSoftBet. It is unlike other slot games that feature the magical theme of witches and wizards. Before you start the game, you’re asked to pick a sorceress to play with. You can pick either a dark-haired witch or a redheaded one. The reels are set on a twinkling night sky with graphics that are cartoonish, large, ornate, and brightly coloured. There is no soundtrack. However, there are sound effects that match what’s happening on screen. With each spin, there is a cascade of sparkling stars that fill the screen. Play on as the witches watch on while you spin the reels of this online casino pokie.

Bewitched is an iSoftbet slot game that has five reels, three slots, and 15 adjustable pay lines. You can play with either one, five, 10, or 15 paylines in this progressive jackpot slot game. Bewitched features low-value card symbols such as the Jack and Ace, and also features a crystal ball, spell book, and red boots. 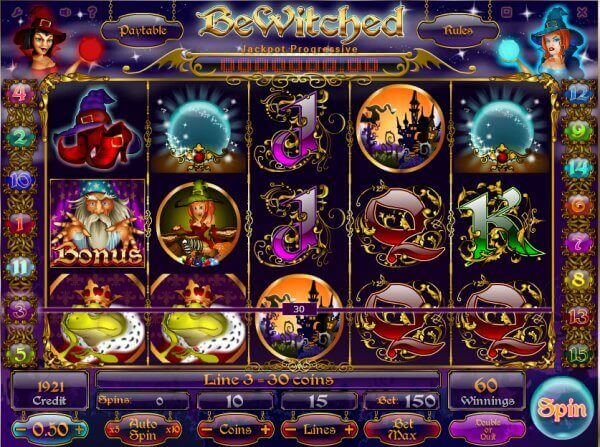 The two witches act as the scatter symbols and if you land two, you trigger the free games bonus. Bewitched also features medium paying symbols, which are a castle, the witch in the green hat, and the frog. They pay out 1 000, 750, and 500 coins, respectively. The owl is the highest paying symbol and it gives you 2 000 coins.

Additionally, landing three or more Merlin the wizard symbols triggers another bonus feature. This one takes you down to his lair. Here you will help him from create magical potions that can reward you with either instant cash prizes, free games, or even the progressive jackpot. However, this progressive jackpot can only be won if you play with all the paylines activated at maximum bet.

The Joka’s Final Rating of Bewitched

Bewitched pokie online has lots of bonus features and a great progressive jackpot. The game is fun and done differently compared to other witch-based games. Some would find the screen a bit too busy for their liking. However, if you’re looking for something that is light-hearted and not too complicated Bewitched is the game for you.