Take a trip on the wild side with iSoftBet’s The King slot. The non-progressive video slot features five-reels, three rows, and 25 fixed paylines. The game is set on the backdrop of an African jungle, with golden lions on the frame of the reels.

The crisp and sleek design is reflective of all iSoftBet slot games. The enchanting sound effects transport players into the wilderness of the jungle, with elephant trumpets making sure that the feeling is authentic. Go through The King slot review to find out everything you need to know about the bonus features in the game. 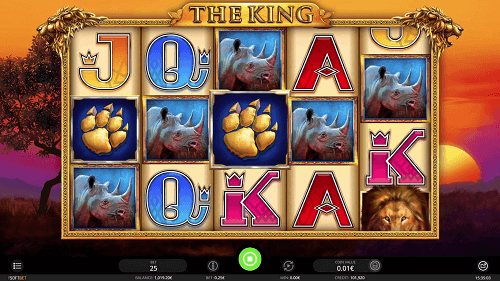 The symbols in the game are consistent with the African safari theme that the game is based on. Players can find the animal kingdom that features the most valuable icons on the reels including the standard poker cards. The low-valued symbols include Jack, King, Queen, and an Ace card. The most coveted symbols are the animals, (elephant, rhino, wildebeest, and zebra).

The wild symbol in the slot game is the lion icon, which can substitute any symbol to form a winning combination with the exception of the scatter symbol.

The scatter symbol is the lion’s paw and it unlocks the bonus features in the game to multiply your wins.

The lion remains the king of the animal kingdom, and this game offers great rewards fit for royalty. Get three scatter symbols on reels 1, 3, and 5 and activate the Free Spins feature, titled the King Spins that rewards players with 8 free spins.

The Joka’s Verdict on The King Slot

With the betting range set at an affordable minimum bet of $0.25 and max as $25 per spin, it is definitely worth your while. The King slot‘s RTP is 96.01%, meaning that you have plenty of chances of winning big. Roar like the king of the jungle and win big today.