Welcome to the dark and spooky world of Zombie Circus pokie from Relax Gaming. Only the bravest players will roll in, and explore this dusky playground. Take a bite of the snacks, but beware. That might not be cotton candy!

Spin these haunted reels to unlock magical charms, and best the brazen beasts that are kept hidden in the dark corners. Play this exciting at a reputable pokie casino and win massive stacks of cash. 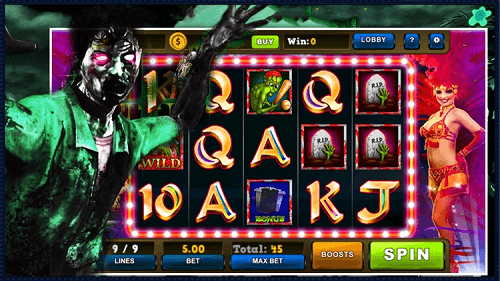 A zombie wave five zombies are present on the screen. Pick one zombie to reveal a hidden prize which will be uncovered during the free spins round.

The zombie waves can be re-triggered during the free spins round when a bonus symbol carousel falls on reels one, three, and five. Re-triggers activate a minimum of two waves where the first one delivers free spins, and the second one creates wild symbols. Choose one of the five zombies that will appear to unlock these special extras.

Zombie Circus pokie is quite simple to play and enjoy. Simply spin the reels to match up symbols, and unlock wins. The casino symbols A, K, Q, J, and 10 appear on the reels in bright colours with faint stars and chipped paint elements.

The other symbols include a demented clown, a bleeding fortune teller, a creepy knife thrower, and a fiery-eyed ring-mistress. The standard wild is a golden stage with skulls and curtains drawn back. Other symbols that will morph into wilds will have the word emblazoned on them in red and gold.

Zombie Circus pokie is a scary ride through haunted reels. Do you dare enter the cursed fairground, and spin to win? Watch out for fortune tellers leading you to your doom, and calamitous clowns following you around. The bonus round and free spins feature is definitely the highlight of this dark Relax Gaming pokie, as it rewards phenomenal free spins and extras.