Get ready for a journey through the mystery woods with the Fairy Gate pokie game from Quickspin. The theme of the pokie game surrounds fairies and magic. The gameplay screen is set against the mystic forest which is beautifully crafted with green trees, access to the magical kingdom is through the tree door on the right side of the game screen and fairy dust. Find out what mysterious bonuses this pokie game has to offer. 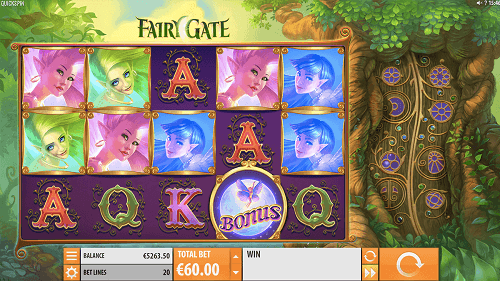 As mentioned above the theme of the pokie game is fairies and magic. This five-reel pokie for fun comes with 20 paylines. Wagering on Fairy Gates will cost between 0.20 – 100 coins.  There are four fairy symbols– Red, Pink, Green, and Blue waiting to land on the reels and reward you.

Players can receive up to 5 random wilds per Fairy Orb symbol. During this feature, players will not find any Bonus Scatter Symbol appearing on the reels.

The Fairy Orb Symbols will award additional wilds but not respins. The round will continue until all ten free spins have been used. The feature not re-triggerable.

Browse the enchanting magical forest as you spin the reels for dazzling rewards. Get a chance to win real money or play the pokie for fun. Try Fairy Gate or other Quickspin pokies today!