Another classic by Quickspin… Sakura Fortunes slot is a mesmerising epic set in ancient, exotic lands where a terrible battle between good and evil is being fought. The beautiful princess, Sakura, tries her best to defend her lands and people from the evil conspirers who threaten the safety of the empire.

Can they be stopped? Spin the reels to unlock special features, and disrupt the grip of evil. Play across five reels, and 40 paylines to save the beautiful princess, and bring peace back to the realm. 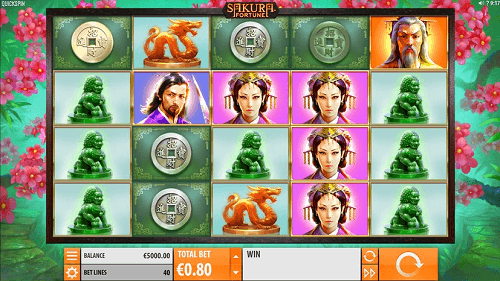 Sakura Fortunes slot game contains three exciting bonus features to discover. These include respins, free spins, and mystery nudges. As all Quickspin games go, this one is visually entrancing with detailed illustrations, and vivid artwork. You’ll be transported to the princess’s side just be witnessing the soft fluttering of her kimono, gentle caress of the wind through her raven locks, and sensual dissipation of cherry blossoms.

As well as the background being luxurious, the symbols, too, were created with care. These symbols include jade lions, Sakura, golden coins, a warrior, jade coins, magenta lions, fan bonus symbols, the old emperor, silver coins, and bronze coins.

The old emperor, Sakura, warrior, and jade lion make up the four top highest grossing symbols, while the coins round up the bottom of the ladder. The princess wild symbol is a full-length Sakura, draped in crimson garments. She is both the wild, and the scatter symbol. She will only appear on reels 2,3, and 4 in both normal rounds, and free spins.

When three or more scatters appear, the free spins feature is activated. Five free spins can be won. If a wild lands, it will lock in place and remain there for additional spins. An additional free spin can also be won.

If two or more princess wilds land, the exciting Mystery Nudge feature explodes on to the scene. Spin to create a winning combination of wild reels, which could, in turn, activate the Sakura Fortune re-spin feature. If the princess appears in all three bonus rounds, it sets off a tract of crazy events. If this happens during the free spins feature, you could end up with up to five locked wild reels. The princess also sees fit to bestow her favourite lucky players with a win of up to 1,000X the bet.

Do yourself a favour and explore the enchanting world of Sakura Fortune slot game. The illustrations are whimsical and delightfully detailed. It’s also packed with surprising interactive extras for exceptional gaming pleasure. Quickspin has knocked it out of the park again, and created a masterpiece of epic proportions. Travel back in time and be whisked away by a magical adventure with Sakura Fortunes slot game.