In 1883, Robert Louis Stevenson conjured a tale of a boy in search of adventure and named it Treasure Island. The adventure begins in Jim Hawkin’s father’s tavern, the Admiral Benbow. One night, the frightening seaman, Billy Bones, storms in, carrying a large sea chest.

During a rambunctious party, Bones confesses that he’s terrified on the one-legged Captain Flint, for whom he was first-mate. He also knows where the captain’s treasure is buried.

The pirates storm the tavern, telling Bones that he has until 10 pm to tell them where the treasure is hidden. Bones dies, and Jim takes his treasure map. And there the adventure begins, me mateys! 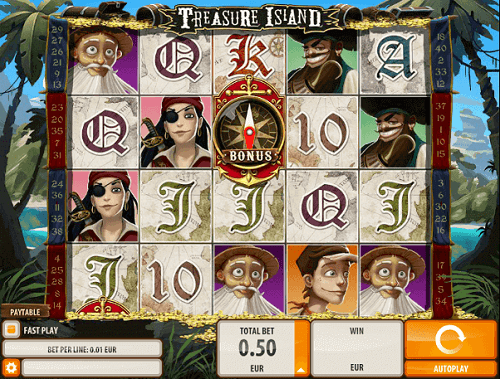 Quickspin takes you on a thrilling journey across the high-seas. Climb aboard, set sail for lands unknown as you search for the lost pirate’s treasure. There are enough doubloons in each chest to make you rich for several lifetimes with plenty to spare.

There’s so much happening in Treasure Island pokie! Three bonus scatter symbols, represented by the compass, trigger the bonus round. Here, you can pick one, and it will trigger one of the following: instant win, free spins, or the treasure hunt bonus.

The amount of free spins won, and the features which are enabled are determined by the island hop bonus. This bonus appears before the free spins, and players can click on different islands to unlock achievements. Extra achievements include: extra wilds, super wilds, and locking barrel explosions.

The treasure hunt bonus, which is triggered from the bonus scatters, gives you five Xs on the map, plus two shovels. All picks award instant wins, plus there’s buried treasure chests that are hiding massive prizes.

Two or more barrel wild symbols trigger the pirate attack feature. A pirate ship sails onto the screen, and shoots two or three cannonballs which create wild symbols. If a cannonball hits a barrel wild, the barrel explodes, and adds more wilds. All symbols except bonus scatters can be substituted by the wild barrels.

The extra achievements from the free spins round include extra wilds, super wilds, and locking barrel explosions. Jim Hawkins, Long John Silver, and Captain Flint can all become extra wilds during free spins.

Super wilds are added to stacked wilds and can substitute for any symbol, except the barrel wild. Locked barrel wilds are created from explosions during the pirate attack, and become locked on the reels during the free spins.

Do you think you have what it takes to sail away across the seven seas and find your treasures? Then climb aboard the pirate ship, and heave ho! There’s an adventure to take, ye filthy landlubber! We’ll test yer sealegs and make a pirate of you yet! Play Treasure Island pokie now.